“That’s racing” is a commonly used term to try to cope with the ups and downs of racehorse training and ownership. Every trainer and owner hears the term, and then uses it to simplify the emotional roller-coaster that we sometimes ride. But I am not too sure “that’s racing” adequately summarises how Dennis Marks, myself, Susanna and our entire stable are feeling today.

Let’s Make Adeal was bred by Dennis, being a grand-daughter of his famous Caulfield Cup and Melbourne Cup winner from 1991. As every breeder – big or small – knows, the  time, energy, professional support, emotion and finances required to plan a mating, raise the foal, educate the yearling and win a race, is almost unmeasurable.

No doubt Dennis has tasted his fair share of success. But like all breeders, he has also experienced the lows. There are many horses “in-between” the successes that do not quite make it to great heights on the track. Those horses are looked after and regularly go on to other careers off the track, and that too can sometimes warm the hearts of breeders. But not the same as breeding a winner – let alone a winner in Australia’s two greatest Cups (Let’s Elope) and an Adelaide Cup (Outback Joe), and a Melbourne Cup runner (Let’s Make Adeal).

Narrowly missing out on a place in the Cup field the last two years, 2015 was to be “Let’s Make Adeal’s year”. In peak condition and fully matured, she became a stakes-winner in Adelaide in May and I set her the target of the Bart Cummings Stakes specifically to make the field in the Cup. Win, lose or draw in the Cup is almost inconsequential when you are talking about a race of the Melbourne Cup’s calibre and profile. (Although we have been feeling confident she would be highly competitive!) 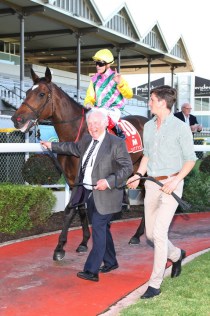 We have enjoyed such a fantastic preparation this Spring. Everything was going so perfectly. Winning the Bart Cummings, a race named in honour of a legend whom I learned so much from and whom Dennis enjoyed so much success with, allowed Dennis and myself to take Let’s Make Adeal along carefully and cautiously in the final month leading into the Cup. Unlike previous years where we were always searching for that win to get her into the field, right up to Derby Day. Being such a big, strong mare who naturally carries a fair weight on her legs, the relief of pressure in these past few weeks was a blessing.

So, we were shattered this morning after track work to notice heat in Let’s Make Adeal’s off-fore tendon. A scan from our trusted vet Emma at Equivets, confirms tendon damage severe enough to not only end her Spring campaign, but probably her race career.

Dennis and I were so excited to share the experience of a Cup runner with all owners in our stable and racing fans in general. We wanted to represent local racing and breeding in our greatest race – one of the world’s greatest.

We wanted to celebrate the achievement of having a Cup runner. Especially with my staff who work tirelessly and provide great care for all horses in our stable. This sad news today is sad news for them also.

But as they say, that’s racing. 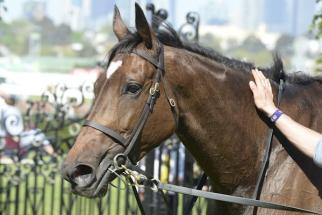