KING OF VANDALS’ win on Tuesday at Bendigo was the first for our stable out of our new Ballarat base. More importantly, it was his first career win after a few challenges in his short career to date. By Cambridge Stud’s BURGUNDY, King of Vandals was given his affectionate nickname “Ron” after Ron Burgundy (The Anchorman) by Daniel and Bec Stonemen who educated him as a yearling. This win is a great breakthrough for his patient owners who joined us at the 2016 NZ Bloodstock Karaka yearling sale.

He has always shown some talent. So Ron has always shown us that he has some talent. From his early jump outs and then his fast finishing placing on debut, we had expected him to win his first race a few starts ago to be honest. He placed in his last three races of his previous campaign, showing a liking to races in excess of 1600m.

In this race at Donald, Ron resumed racing over 1300m after a couple of nice trials firstly at Flemington, and then at his new base at Ballarat. Missing the start wasn’t the plan, but senior rider Dwayne Dunn did not panic and had Ron settled comfortable towards the rear of the field. As the corner approached, gaps started to open and Ron was only to pleased to take them.

The final 100m was pleasing to watch, with King of Vandals improving into the lead to win going away from the place-getters. This has given Nigel plenty of confidence to push on to races in the 1600m – 2000m range this campaign. 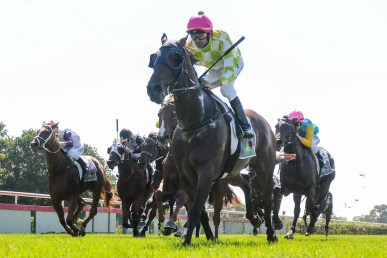