At Kyneton on Thursday, Distant Sky delivered a most satisfying result for his owners and the stable when winning his fourth race. We have written about our little mate Distant Sky several times, saying that he has great courage and rarely puts in a bad run. But we must admit this preparation has been a little frustrating after two very promising trials in December to prepare him for this campaign. Although never beaten far, Distant Sky was finishing a couple of lengths further afield than expectations, the difference between placing (and winning here and there) and finishing 5th or 6th.

This win at Kyneton was particularly satisfying as it is testament to the facilities that we now have at our disposal at Ballarat. The combination of day yards, a walking machine, a bull ring and of course more open space, allowed Distant Sky’s routine to be altered slightly after a below par 6th at Donald. These modifications brightened Distant Sky up and that was evident in the parade ring and certainly at the start of the race where he jumped cleanly with the field for the first time in a few starts.

Michael Dee positioned him comfortably off the fence and in clear galloping room, and made a timely move to be within striking distance of the leaders on the corner. At his first run back in BM58 grade for some time, our little mate was simply too good despite carrying 60.5kgs – a fair weight to carry for a small horse. 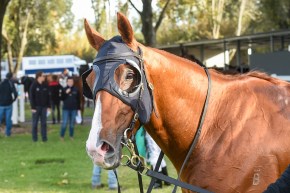 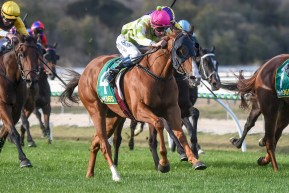 Congratulations to all the owners who love Distant Sky as much as we all do in the stable. He proves you don’t need to own a champion horse to enjoy racehorse ownership.